Alcohol is the Date Rape Drug

We have all heard the headlines: unconscious girl is assaulted behind a dumpster. College students play blackout drinking games. The facts are sobering. A sexual assault is any time either a stranger, or someone you know, touches any parts of your body in a sexual way, directly or through clothing, when you do not want it. Sexual assault includes situations when you cannot say no because you are drunk, high, unconscious, or have a disability. Some attackers use weapons, threats, physical force, and some use alcohol, drugs, or a combination of both, to prevent victims from fighting back.

According to the National Institute for Health’s National Institute on Alcohol Abuse and Alcohol (NIAAA), “conservative estimates of sexual assault prevalence suggest that 25 percent of American women have experienced sexual assault, including rape. Approximately one-half of those cases involve alcohol consumption by the perpetrator, victim, or both. Alcohol contributes to sexual assault through multiple pathways, often exacerbating existing risk factors. Beliefs about alcohol’s effects on sexual and aggressive behavior, stereotypes about drinking women, and alcohol’s effects on cognitive and motor skills contribute to alcohol-involved sexual assault.” Because of the strong drinking culture in colleges, the statistics are even worse on campus. Approximately 50 percent of college women have been sexually assaulted, and 25 percent of college men have committed sexual assault.

Alcohol is used both to impair potential victims and to break down inhibitions for potential perpetrators. In a Washington Post poll, two-thirds of survivors said they had been drinking just prior to their assaults.

We spoke with Bobbi Gagne, the Executive Director of the Sexual Assault Crisis Team (SACT) of Washington County, Vermont, a non-profit organization created in 1984. Bobbi confirmed that “Alcohol is the date-rape drug.” The SACT has a 24-hour, 7-day/week emergency hotline (provided by highly trained advocates); hospital and legal advocacy to provide support and inform victims of their options; and support, training, education, school, and community programs to help prevent sexual assault and human trafficking in our community. They have the only sexual assault shelter in the United States to offer emergency shelter to male victims, victims with non-binary genders, and female victims of sexual violence. They also have offices on the campus at Norwich University. Their shelter even provides space to accommodate college students’ out-of-state parents if needed. This is an incredible resource in Washington County.

According to Gagne, middle and high school kids need more education on the harmful effects of alcohol and what to expect in healthy relationships. Parents are encouraged to talk with their kids about alcohol; not allow underage drinking; monitor their children’s activities; model healthy alcohol consumption; and maintain communication with their kids. If your high school, community or college has resources or programs, take advantage of them.

What can we do?

Prevention of sexual assault looks at the victim, the perpetrator, and bystanders.

Victims: Know your limits with drinking, and do not become impaired. Know what is in your drink. A red solo cup can have 5 shots in it! Plan ahead for limiting consumption and for what level of sexual activity you want. Be aware of your surroundings. Avoid situations where you are likely to be at risk.  Notice if someone is pushing alcohol on you. Have friends you can turn to when social situations turn bad or you need an escape hatch.

Perpetrators: Not every perpetrator is a predator. For those who are out for a social time, the same advice as above applies. Have an understanding of a healthy relationship. By avoiding impairment, you can keep your decision making skills and you can avoid becoming a perpetrator. You need to be capable of recognizing actual consent, and understand that drunk consent does not equal real consent.

Bystanders: Encourage peer leadership that seeks to change cultural norms around sexual violence, blaming the victim, and the drinking culture. If you see behavior that threatens someone, speak up or take action. If you see an impaired person, provide immediate assistance. When a perpetrator is “excused” of responsibility because of athletic prowess, popularity or other factors, speak up. Many high schools and colleges have programs and curricula that specifically address the role of the bystander in preventing sexual violence and alcohol abuse. Report incidences of sexual violence and help others get the support they need.

All of us: Hold perpetrators accountable for their behavior and illegal actions. Make sexual assault and sexual aggression important public health problems. Support the organizations and systems that educate about sexual violence and that hold people accountable.

Editor’s note: Current PrEvents is produced by the Central Vermont New Directions Coalition in collaboration with the Washington County Youth Service Bureau, as part of the Regional Prevention Partnership grant from the Vermont Department of Health. 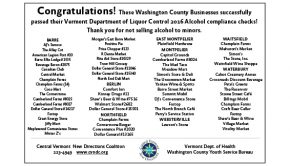 Parent Up for Prom and Springtime →